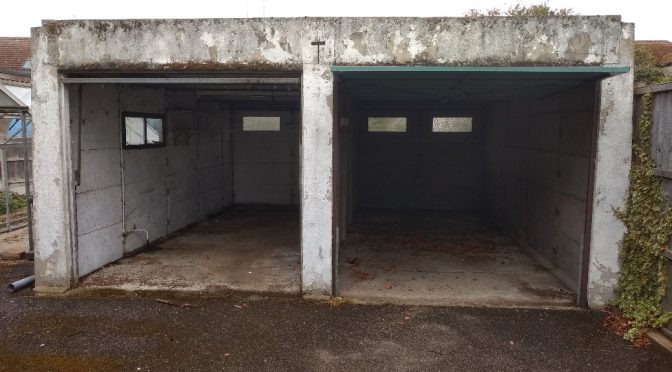 The builders showed up bright and early. We thought they’d take their time, scope it out, make plans, but nope. Straight in. They ripped out the doors and cut them into bite sized chunks. for disposal. They kitted up in onesies and masks to take down the asbestos roofs

By the time it came on to raain at 3 they’d pretty much cleared the site.

Not bad for a single day’s work 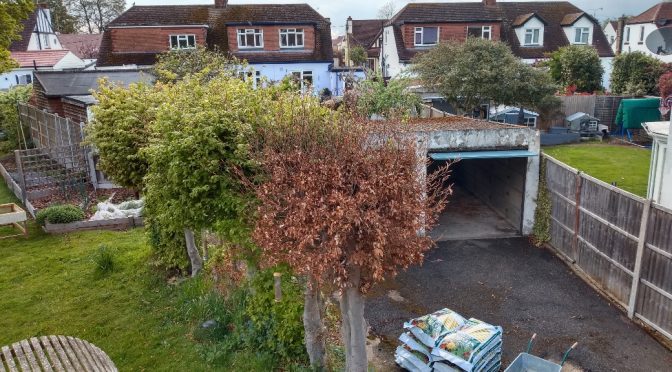 Karen says I should put the saga of the garage up here. It would have worked a lot better if I’d started uploading to the blog from the start, but I didn’t so now I’m going to have to live with it.

So this house has, since time immemorial had a pair of detached garages. Ugly, pre-cast concrete things with corrugated asbestos roofs. We’ve known for ages that they’re knackered and not really fit for purpose. Th tiny windows were grimy and cracked and there was something wrong with the gutter at the back that meant we got water into one of them after any rainfall.

The electric power went away when the house was rewired in 2009; the electrician claimed he couldn’t find the house end of the cable but we suspect he knew fine well where it was but also knew that it didn’t meet the regulations and didn’t fancy running a new one.

Obviously we never kept the cars in them. Lawnmower, bikes, trolley barbecue, a vast pile of miscellaneous gardening, DiY and bike tools, but never was there a car. Or even room for one.

Not fit for purpose perhaps but never quite making it to the top of the to do list, until early this year when the leaky roof got very much worse.

We got a builder in to look. He opined.

Curiously, having the things cleaned up, re-roofed and the doors and window replaced turned out to be not that much cheaper than just razing them to the ground and starting again. So that’s what we decided to do

This may turn into a saga

We have squirrels in the roof space over the extension. Noisy buggers and although so far all they’ve apparently chewed is loft insulation I know from experience that they can be destructive little buggers. There aren’t any plastic water pipes but there are lighting cables and we really don’t want any damage to them.
So we Got A Man In. On Tuesday
He took one brief look and said, Yep. You got squirrels. He rigged two vicious looking traps (baited with peanut butter as it happens) and told us he’d be back on Friday (24th) We spent three days listening for a SNAP but all we heard was scrabbling noises.
This morning he went up there and then told us that the little sods had been shifting the traps around and did actually manage to spring one of them but without getting caught He’s reset them and he’ll come back sometime next week for another look. He reckons he’ll get them eventually. “We always get our squirrel!”
And when he’s caught them, he’ll look at blocking up their access under the eaves.