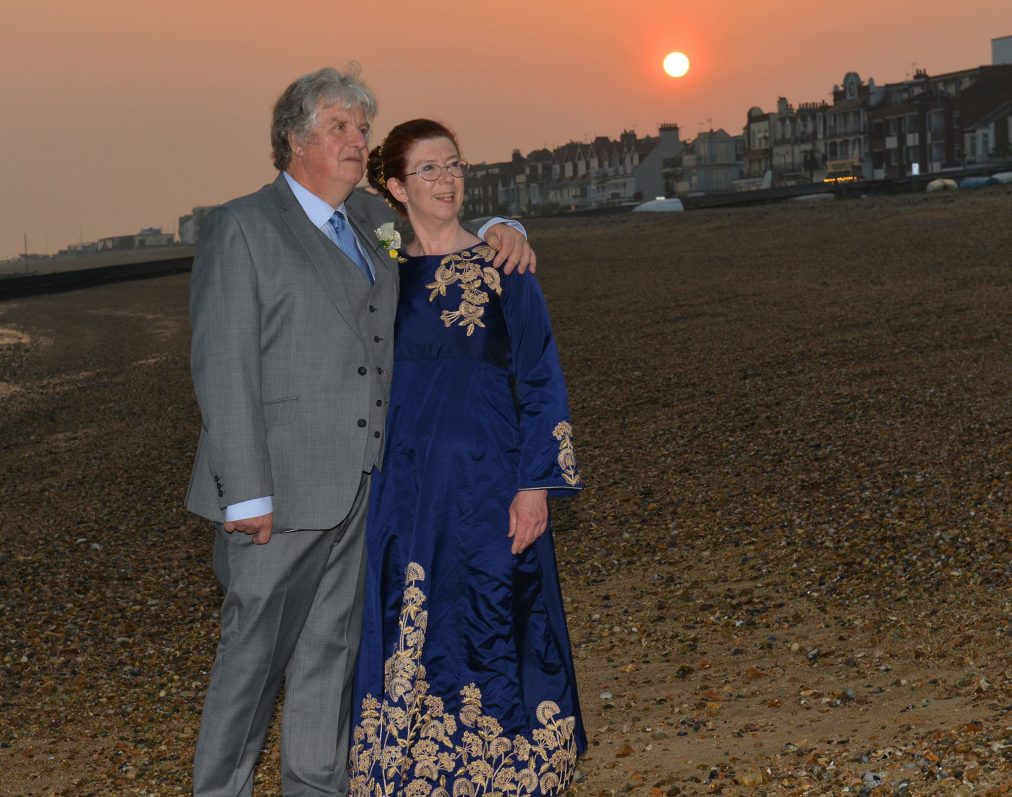 So you probably know  we got married.
Karen and me. We got married.  Friday 20th.  It was great. We had a seriously good time–so good I’m still reeling  and trying to bring it all into focus to write something about it.

But while I do, here is something I prepared earlier. It’s the short speech I gave before the Best Man’s speech. I’m not sure that this was fully in compliance with the traditional order of events, but I really don’t care.  There was stuff I wanted to say, and say it to all the friends and family.

This is my script. It was NOT delivered exactly as written. I kind of surfed the euphoria a bit and ad-libbed a few times.  “Check against delivery,” as it used to say on the advance copies of political speeches I occasionally saw in my previous life.

Seemed to go down reasonably well.  It got a few laughs anyway.  For those who did see it live, thank you for being so appreciative. 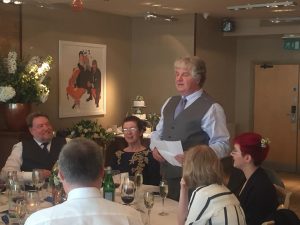 Well, it’s been a while coming, hasn’t it?

I mean, not many people wait until their 60s to dip their toe into matrimony for the first time.. Usually once you get into middle age, you’re a bit set in your ways, but this seems like the right thing to do now.

From another point of view it’s been twelve years. Twelve years since Karen and I decided we’d been typing at each other on social media long enough and went to see Buster Keaton in a silent film called The Cameraman. It was great fun to see him inventing all the slapstick stunts with the tripod that we were still doing 100 years later. And afterwards we decided maybe we should do something one day again soon. So we did, and 12 years later we still haven’t stopped talking.

But maybe the real wait has been six years.

Let me take you back to March 2012. Karen had joined me at the BBC at a retirement party for a fellow cameraman.  As usual, a whole bunch of old hands showed up and I found myself in conversation with quite a few of them. Most of them seemed to think I was likely to be the next departure, and on the whole they were encouraging me to take the plunge as soon as I could. And so so, they reckoned, should Karen.

Well, we chatted about it and started thinking out loud about what retirement would mean and then she said something along the lines of, “That would be a good time to “sort out the paperwork”.

“Sort out the paperwork” was our euphemism of choice for the “upgrade” of Karen and Derek’s long standing separation to a full divorce.

Hmm. I said. “Well, if you did do that, I’d be happy to do the next bit of paperwork”

There was a pause. She looked at me, looked at the glass of BBC red wine I was holding, which was definitely not my first of the evening, looked back at me and said “Does that mean what I think it means?”

There may have been less romantic proposals, but maybe not by much, and I couldn’t let it end there. So a little while later, when were leaving the party I did, in fact, get down on one knee and proposed properly, just so it was official.

And for the avoidance of doubt, I said it AGAIN once I’d sobered up the following morning.

And here we are.

Before I hand over to Steve for the ritual character assassination I do just want to say a few words of thanks.

When I started seeing Karen I was a bit nervous about meeting her extended family. I needn’t have been. Without exception, everyone on her side has been welcoming to the newcomer. Particularly, I want to thank Chris, Tom and Clare who took to to “mum’s new bloke” without so much as blinking an eye and made me feel like one of the family.

Thanks also to the staff here at the hotel for arranging all this for us.

And finally thank you to all of you for coming. Some of you have come some distance to join us today and I can’t tell you how much we appreciate that. We hope you’ve had, and will continue to have, a good time.

At this point I muttered something about traditionally giving the Best Man a present but thinking that he’d appreciate this rather than a set of cuff links or something and handed him a bottle of decent (as recommended by the local Majestic Wine Warehouse) Pino Grigio (As recommended by a mutual friend)
I ran the first draft past Karen and she made a few suggestions, which I incorporated and reminded me of the following .  I’m including it for completeness.

We actually first became acquainted online in the late 90s: the earliest post from “Roy Gillett” on UKCA I can find quickly in my archive is from 2000, and even then we were disagreeing *very politely* on the existence of God 😀

In 2004 we nearly met, but Brendan [Brendan Stallard, an old online mate of ours]  couldn’t find a slot in the schedule so it fell through. I can’t find the one where we all met up in the Black Friar but it must have been shortly after that.

In 2005 you were helping me with getting a facsimile signature into my E mail sign-off, and I was helping you with family research on the Censuses.

At the end of the year, or early in 2006, the famous “Life on Mars” thread started – and you, as an old UMIST student, queried the credibility of the price of a ticket to Old Trafford as portrayed on the screen. I aced the game by being able to produce an actual stand ticket from Easter 1980, priced at £1.40. It’s fair to say I have a certain reputation for record-keeping.

After that the conversation sort of carried on and deviated into other matters – culminating in me saying I was going to The Cameraman, and you offering to meet up for a drink between work and then….(see above)

Steve’s speech, since you ask, was pretty damn good.  I was only very slightly embarrassed and Karen didn’t recoil in horror once. Well, in twelve years she’d heard most of the anecdotes already,

I want to write a bit more about the planning and build up and the event itself but it’s going to take a while and I need to wait on the photos from the official photographer.

Thank you for reading.

PS I should probably mention that the headline picture is an early preview of the set from the official snapper–an old BBC mate, Jon Daly Photography. An the embedded speechifying picture is courtesy of Louise Nicholson, probably my oldest friend there.