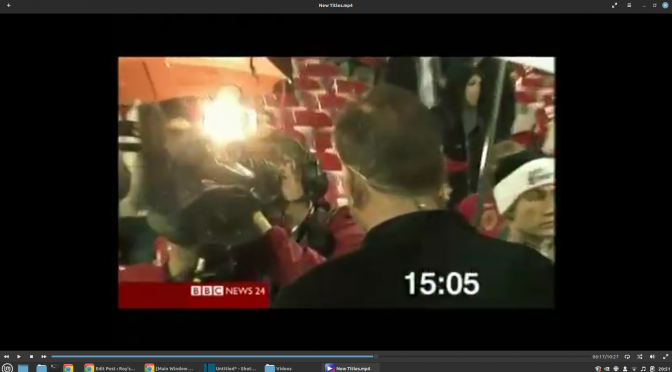 In 2006 I spent a rather enjoyable five weeks touring Germany following the England footy team in their latest attempt to win a World Cup. For three weeks we followed their progress through the group stages and two knockout games until the inevitable disappointment of losing to Portugal on penalties in Gelsenkirchen. After that I decamped to Berlin and spent the rest of the tournament on a fixed camera overlooking the Brandenburg Gate.

Like I said, I rather enjoyed it, so when we got home I started dropping some fairly unsubtle hints in certain quarters that I could be available for the 2008 European Championships due to take place in Austria and Switzerland.

First, though, England had to qualify. Much as it might annoy fans of Scotland, Wales and Northern Ireland, it’s probably true that BBC National News only does the full saturation coverage of these things when England are involved. So I was keeping a beady eye on the qualification campaign.

It did not go well. It seemed to start reasonably with a 5-0 thrashing of Andorra but then they started making hard work of it and by the end of the campaign it came down to one game against Croatia at Wembley in November 2007.

As I recall, assuming Russia were going to beat Andorra that evening, at least a draw was necessary to qualify. Seeing as it was a pivotal moment, News decided to send a team to Wembley to watch over it. Funnily enough, most of us on that job were hoping to get the trip the following year, including me.

My position was on a pitchside camera with sports correspondent James Pearce. I’d worked with James before, at the 2004 Euros in Lisbon and we got on pretty well. We weren’t allowed out there during the game but we did a lot of preview stuff beforehand and made ready to go out as soon as it was over.

Without dragging it out too much, England blew it. 0-2 down at half time and looking out of it. They dragged themselves back into contention and with a quarter of an hour to go it was 2-2, which would have been just good enough even with Russia beating Andorra. Then they conceded a third and couldn’t manage just one last goal. Disappointment all round. England, and by extension, many of us, weren’t going to the Euros.

That, you may recall was when photos of manager Steve Mclaren sheltering under an umbrella appeared with the caption “The wally with the brolly” A little unfair I thought, because it really was horribly cold and wet, as you will see.

The other thing that happened that night was that the BBC’s rolling news channel News 24 sent a camera team to shoot material for the countdown sequence they used as an introduction at the top of the hour. This is what they got.

This short, blink and you miss it, clip from that night, taken as the team were warming up, appeared in most of the headline countdown sequences on News 24 for many years. Like I said, it was cold and wet which is why I’m muffled up in the bright red jacket.

There is another clip they sometimes used showing James and me interviewing Alan Hansen. If I can track that down I’ll add it here later. This one came from a ten minute compendium of a number of versions of the sequence at YouTube

So we didn’t get to go to the Euros. Not a major tragedy in the history of the world and, as it happened, two years later most of us got the opportunity to go to the World Cup in South Africa so that was nice.