Thursday was almost certainly my last day on camera for the BBC. I have one more day on shift, next Wednesday, but that’s going to be taken up with handing back my camera kit, editing laptop, phone, ID and other stuff. Unless various kinds of gooey stuff hit the fan in a big way between now and then I won’t be expected to film anything.

Yes; curiously, some of us still casually use “film” as the verb despite the fact that it’s been thirty years since we switched to tape and I’ve never shot a frame of film in my career. We’ve been through three different cassette formats and now shoot on solid state memory cards but the terminology seems dug in. It’s less common to hear the edit suites called “cutting rooms” but it has happened.

If I’d thought I was going to get an easy ride, a gentle, relaxed day at the end of a career I was sadly mistaken. Just as I was going home the night before I was handed the call sheet for a six o’clock start: a two camera interview in the NBH building with the outgoing CEO of energy company Centrica.

The job went off painlessly enough and I was a bit chuffed that John Moylan, the correspondent took a minute to wish me all the best for the future.

Another quick job in the building followed and then, after a couple of large coffees, came the call. Could I please set up on the Piazza at the front of the building for an interview at midday?

Of course I could.

That, it seemed to me, was liable to be IT. My last job. Ever. My crack of dawn start meant I was supposed to be back in West London at half past three and allowing for travelling I didn’t see time for any more shoots.

My last job. Better get it right then.

Don’t panic, I got it right. I did keep obsessively checking that I was turning over; (See what I mean about the terminology? Memory cards don’t turn) it would have been mortifying to make that classic mistake at the finish. (I did do it once, in about 1995, and when the pain has faded in ten or twenty more years I might write about it)

I got the producer to take a couple of photos for posterity. 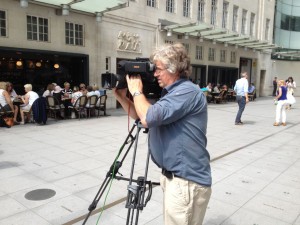 Perhaps I could have tucked my shirt in but then again it’s how most people will remember me. 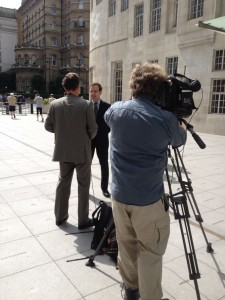 The guest is a James DeWaal from Chatham House, the international affairs think tank and he’s talking to correspondent Nick Childs about NATO’s response to Russian aggression.

And the camera’s eye view.  I can’t post a video due to filesize restrictions so here’s a grab 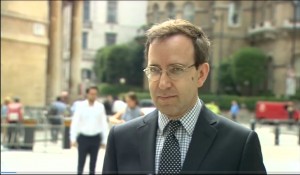 Admire how I threw the background out of focus.

And that was it. Unless  a truly major story–and it would have to be Senior Royal Death major I think– breaks in the next three days that is probably  the last thing I’ll ever shoot for the BBC.

I have to say It didn’t feel that momentous.  The sky didn’t darken and lightning didn’t flash. There was no portentous synthesiser accompaniment swelling in the background. I handed over the card, wrapped up and took the kit back to the car.

And apart from the very nice lunch the desk took me out for, thank you all, that was the end of the day. One more to go and I’m as free as a bird.