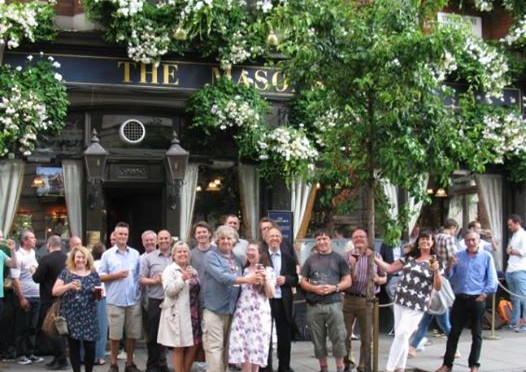 So that was it. My very last official day at the BBC.

No one expected me to film anything (although I did take the precaution of ringing in at 7 o’clock, same as usual, just to make sure) so the schedule was up to me.  I had a few bits of admin to do and then I was going down the pub where I would attempt to stay upright and coherent at least until Karen poured me into a taxi.
First up, handing back my camera and stuff.  I had a relaxed  start, walked round the corner to the BBC’s engineering base and hauled the stuff out of the locker. 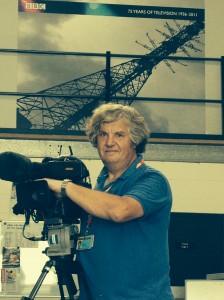 Couldn’t resist one last selfie–if I can call it a selfie when someone else actually took it.
The maintenance manager and I stepped through his list and he didn’t grimmace  too much at the occasional ding or evidence of  <cough> wear and tear.   I even had everything on his list still in the kit.

At New Broadcasting House later that afternoon I handed back the laptop that I’d never edited on. I tried to hand in the phone but they told me to keep it until the number got transferred to my new handset.

Then–the surprise. The assignments team took me to one side and produced tea and cakes; a few then someone made a short speech thanking me for my efforts.  At that, Louise Croft produced a card absolutely crammed with good wishes, a bottle of what I am assured is top notch wine (Chateauneuf du Pap) and two magnificent cut glass goblets to drink it out of.

I was stunned speechless. (and not for the last time that day either but we’ll get to that) It wasn’t something I was expecting and I was rather touched. <sniff>

Then: the pub. I got there a bit after Karen did having got slightly wrapped up in tidying my BBC network area but she bumped into a producer she knew slightly 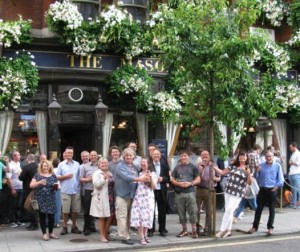 That was about half the number who came. I won’t name them all; they know who they are. Thanks.

The highlight of the evening though was the present from Karen. Entirely unbeknown to me she’d commissioned a couple of paintings from one Liam O’Farrell. They show the Old Bailey and the Royal Courts of Justice with a tiny cameraman in the foreground. 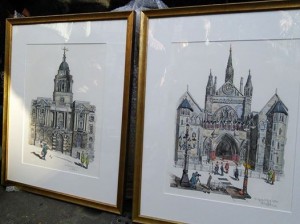 That was when I was really, truly struck dumb. They will have pride of place on my walls for ever more.

We got a cab home (courtesy of the app on Sara Shepherd’s phone) and collapsed into bed to sleep it off.
And just so you know, I didn’t have that much of a hangover. 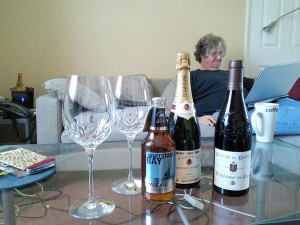 ‘Poo from Bobski Prabhu and craft ale from Sara.

Many, many thanks to everyone and I may see you again at future events.