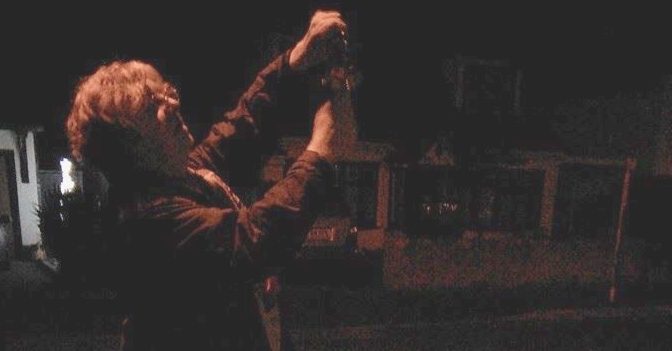 I don’t remember exactly when, my best guess in sometime in the late ’70s or early ’80s, but I once saw in the New Year in a pub with my parents and a few uncles and aunts. The events of the evening are largely forgotten–I don’t even recall which pub–except for one thing.

As the year changed, the landlord used the closing time bell, a replica ship’s bell, to ring out eight bells, the end of the watch.

All of a sudden, my father shouted across the bar, “Sixteen bells! Sixteen!”

Apparently it’s a seafarer’s tradition to ring out the old year with eight bells and ring in the new one with eight more and as an old merchant seaman my dad wanted to see it (and hear it) done properly.

I forgot about this for a long time, until maybe nine or ten years ago I spotted this on the mantlepiece at Karen’s

It’s a small bell, and as soon as I saw it, the memory came back. The next New Year’s Eve I took it outside and as midnight passed, I rang sixteen bells on it in memory of my father, who had only died a couple of years previously.

I thought it was a bit quiet, not surprising for its size, so a couple of years later I got hold of something a bit bigger.

This one makes a ding I can actually just about hear. And every New Year since 2014 into 2015 we’ve gone out to the front of the house at midnight and I ring sixteen bells on it Two sets of four double strokes.

Eight bells for the old year and eight for the new.

I still find the bell a bit quiet. To my ageing ears it sounds with a click rather than a clang, so sometime before the next time I’m going to get hold of a proper ship’s bell: four or preferably six inches across. That will tell the entire street it’s the New Year.

Happy New Year to you all. May it be a better one than the last one.

One thought on “Sixteen Bells”