One of the things I’ve enjoyed about the last few weeks is that I never seem to have been far from some sort of  party. I was bought lunch (a very up market burger) on my last operational day; we all went down the pub on my birthday; I had a barbecue in my garden a few days later and on Thursday just gone I was invited as a retiree guest of honour to what is becoming the annual summer party at the BBC News operational base in Park Royal.  They get caterers in to do the barbecue properly,  lay on some beer and wine (and soft drinks, don’t forget the soft drinks)  and just relax for an evening.  They chose the date in the hope that it would be a quiet spot between big stories–after the World Cup and Commonwealth Games but before the Scottish referendum and the party conference season.  This year they got Bob Prabhu to issue a general invitation through his retired staff newsletter.

It was already going when Karen and I turned up. Plenty of people eating and drinking and just about the first person I bumped into was  an old picture editing hand who got the evening off in the right spirit with an anecdote about the old days. Apparently he showed up to edit on a job I was doing and I promptly forced the camera on him because I needed the loo.  I’ll have to take his word on that because I don’t remember it at all. All I can say is that I knew he’d cope because we’d done the basic ENG course together thirty years ago.

Then I was accosted by a someone I knew by sight but had not ever had an occasion to speak to–Andrew Steele, a senior manager in Operations. He’d actually been my manager about three levels removed for the last  year or two but somehow our paths hadn’t crossed.  he said he wanted to introduce himself because in an hours time he was going to severely embarrass me and I should at least know who he was.

We had a burger; we drank beer (They got in some good stuff. London Pride and Marston’s Ped for a couple although unusually I ended up drinking San Miguel, mostly because it was kept cold) and soon  Andrew called the meeting to order.

After a few words about the trials and tribulations and successes of a stupidly busy summer he took us back to 1979. Margaret Thatcher and so forth and how, on the 29th October, a young man called Roy Gillett started with the BBC and I held my breath

It was mercifully brief. He didn’t give a full rundown of my time, just mentioned that I was one of only a few who’d come through engineering to the camera unit (actually he reckoned I was unique in that respect but I don’t think so) and only told one embarrassing anecdote: a tale from 1990 about how I drowned a camera car in Wales, losing my wallet in the process.  You can read my version–the true version– of that incident here.

Then he gave me a leaving  gift . Another present! I thought the assignments desk had taken care of the leaving present but here was another one.  I scrabbled to unwrap it as Andrew segued from my departure to saying goodbye to Andrew Latham, who’d been running Operations for many years and was also leaving.  I got the parcel open and…

OK, I wasn’t quite as stunned as I was when I got the paintings from Karen (here and here) but it was quite a shock.

Some history. When I left Manchester  (UMIST)in 1979, a bunch of friends got together and got me a leather beer tankard with the UNIST Socials logo on it. I still have it. I never actually drink out of it; I suspect it would be unwise after thirty five years. At the very least it would need to be re-conditioned (soaked in beer for a couple of days) but I keep it on display in the living room.  Steve Hughes, who was part of that team,  had the idea to do it again, for the sake of symmetry. He conspired with a mutual friend, Jackie Burns, who knows people in the art world and recommended the craftsman  and with Karen whose task it was to get my precise joining date out of me without spilling the beans (because it seems HR couldn’t oblige)  and commissioned a leather tankard with my career dates.

And as I stood there gazing at it in disbelief, Andrew thrust the microphone at me.

I babbled. I gabbled. I’m not entirely sure what I said. I think I eventually burbled something about thanks and how the two mugs perfectly bookended my career. There is a threat of a video. Bob Prabhu was filming the whole thing for prosperity. If it goes on Facebook I beg you not to watch it.

And with the formalities over, we settled down to some serious partying. I was pleased to see a couple of recently retired  colleagues show up, including Monty Johnson who gave me advice on being retired (get up in the morning!) and Dave Heath. Everyone I ever speak to who has retired has never regretted it. I was amused to find I’d become the advocate for leaving. Several serving members told me they were seriously considering their options and I told them, with all the authority of my three weeks’ experience of retirement, Go For It.

I got a couple more little leaving tokens from Grant Henderson (wine!) and Alan Murdey, which touched me greatly and we eventually weaved our way home when things wound down at about 10.

I managed not to take any usable photos at the party itself (camera in self-timer mode, photographer in  beer mode) but here’s one from the next morning: me with both mugs. 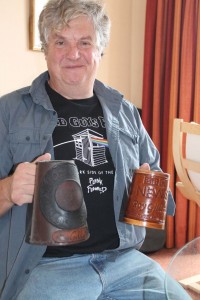 I look pleased I think

So thanks to Steve, Andrew Steele, Karen, Jackie , Bob Prabhu and everyone who came to Park Western that night and gave me a great send off.

Maybe I’ll see you next year.